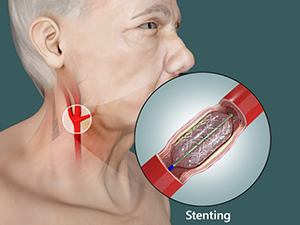 Carotid arteries are the arteries in the neck that supply blood to the brain. Carotid artery disease condition occurs by atherosclerosis, which is deposition of fatty material or plaque in the walls of carotid arteries.

The fatty material thickens and becomes hard blocking the blood to flow within these arteries causing nerve cell death and stroke as a lack of oxygen to brain cells.

You may be at higher risk of developing carotid artery disease if you have the following factors such as:

The symptoms do not develop at early stages of development. The most common symptoms include:

If you notice any of the symptoms, then your cardiologist may perform physical examination and asks your medical history.

Your doctor may request for diagnostic tests; the common tests include:

Carotid stenting is recommended by your cardiologist only if the conservative treatment such as medications and no improvement in changes to lifestyle habits.

Carotid stenting is indicated in patients who are at increased risk of developing complications such as stroke while undergoing a surgical procedure called as carotid endarterectomy, to treat the blocked carotid arteries.

During the stenting procedure, your surgeon performs angiogram procedure to identify the location of the blockage and how much the carotid arteries are blocked.

During angiogram an incision is made in the groin or the thigh area and a catheter is pushed into the blood vessel until the blocked part is reached in the neck.

A contrast dye is then injected into the artery and X-ray images are taken showing the location of the blockage. Now the surgeon will proceed for stenting procedure.

While stenting procedure, a guide wire is inserted through the catheter and is advanced it to the blocked area. A clot protection device is placed. The device acts as a filter to trap the clots that escapes into the blood for circulation and helps to reduce the risk of stroke during the procedure.

Another catheter is advanced into the blocked artery having a deflated balloon at one end through the guided wire into the blocked site. The balloon is then inflated which pushes the plaque against the artery walls and allows the blood to freely flow into this artery so as to reach the brain. The balloon can be deflated and inflated more than once to provide effective results.

Your surgeon will then place a stent at the tip of the catheter before inserting it to the blocked site. When the balloon is inflated, the stent is pushed within the artery to help the artery to remain open.

Some of the stents are coated with drugs to prevent formation of clots or prevent the artery to close. After the procedure, the balloon is deflated, the guide wire and catheter is withdrawn along with clot protection device.

The stent remains in the artery and the incision is closed and wrapped with tight pressure bandage to prevent bleeding.

Complications related that may occur after carotid stenting procedure includes: 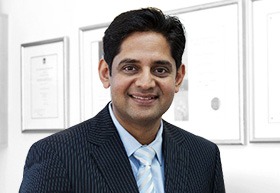